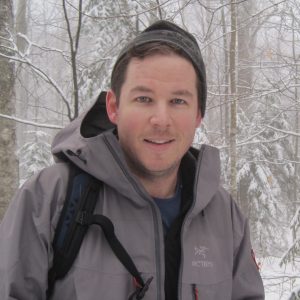 AGHP student member Cameron Ross is a Ph.D. student at the Royal Military College of Canada (RMC) in Kingston, Ontario. He is conducting research using numerical modeling techniques to improve the understanding of how deep permafrost responds to climatic variability and anthropogenic forcing at the surface over the long-term. “Infrastructure owners want to know how warming air temperature, increased freeze-thaw cycles in winter, and changes to precipitation patterns will impact their assets over the next 30 to 70 years”, says Cameron. “It is often difficult for consultants to thoroughly evaluate these future conditions, and how resilient the permafrost and dependent infrastructure will be to long-term trends coupled with extreme events. Numerical models help to predict some of these outcomes but are often limited by over-simplifying assumptions, restrictive boundary conditions and/or insufficient model depths.”

As a student of the collaborative GeoEngineering Centre at Queen’s-RMC, Cameron benefits from access to courses, resources and joint seminars hosted by the Civil and Geological Engineering departments at both RMC and Queen’s University in Kingston. His broader interests within the geohazard and geotechnical community are on cold- region geohazards and mitigation, and on geotechnical design and construction in challenging mountainous terrain and permafrost ground.

Before joining RMC, Cameron worked in geotechnical consulting for ten years. “I’ve had the opportunity to work on geohazards projects in some beautiful corners of Canada. Some that come to mind include design and construction of MSE avalanche defense structures for a hydroelectric facility in the Coast Mountains of British Columbia, rockfall assessments near the Northern Village of Tasiujaq, Nunavik, and rock slope stabilization efforts above a railway on the Moisie River in Quebec.” Cameron also has an MSc. in Applied Snow and Avalanche Mechanics from the University of Calgary and consults part-time with 6 Point Engineering of Nelson, BC on avalanche risk assessments and geotechnical design of avalanche risk-mitigation measures.

We asked Cameron a few questions about his career interests and thoughts on the AGHP:

Geotechnics, avalanches, and permafrost. How does it all tie together?

Snow and permafrost, those are my bread and butter. Snow and permafrost soils are earth materials with engineering properties that are highly sensitive to small temperature changes, especially approaching 0oC. The thermal condition of both play a huge roll in their stability. Permafrost isn’t always first-to-mind when thinking of geohazards, but its degradation can lead to increased rates of solifluction, retrogressive thaw-slumps, and active-layer detachment slides on inclined ground, and subsidence of ice-rich soil on level terrain.

Snow avalanches, on the other hand, are frequently the governing geohazard from an operational perspective for infrastructure in mountainous regions. Historically in Canada, we have relied heavily on active forecasting and control methods to protect worksites and roadways from avalanches, but our desire to push development into more technically challenging terrain, combined with increased safety standards, has led to the adoption of more permanent mitigation/protection structures which require engineering.

One of the fascinating projects I’ve heard about recently involves the design of avalanche fencing (to inhibit snow-slab development in the start zone) in permafrost soils on a mountain slope above a village on Svalbard. Exceptional climate warming and increased rainfall are increasing the summer active-layer thickness on the slope and increasing soil saturation. This leads to active layer detachment slides which are causing headaches for the designers of the snow-fencing foundations. I’d love to be involved!

How did you discover the AGHP, and what is your involvement with the association?

I first heard about the AGHP during discussions with colleagues at the annual Canadian Geotechnical Society conference in Ottawa (fall 2017) and joined the association as a student member in the winter of 2018, in time to take advantage of webinars on 3D remote sensing and avalanche risk mitigation. Now, as a volunteer on the AGHP social media team, I promote upcoming webinars and share news from our Directing and Corporate Members (and other exciting geohazard tidbits) on LinkedIn and Twitter. Social media is an essential avenue for the AGHP to share initiatives, projects, and stories with members of the geohazard community and the broader geotechnical community. We just need our Directing/Corporate Members to keep (or start) creating social media content we can share!

Is it important for students to join associations like the AGHP?

Yes, it’s a gateway to the broader community, particularly the practitioners. Conferences are frequently academic-heavy, and so associations are an alternative way of connecting with practicing engineers and geoscientists. It is also essential for students to support their academic development with up-to-date information on industry standards of practice, much of which can be learned from professional associations like the AGHP.

How can the AGHP engage and recruit students to the association?

Offering free webinars worked for me! An AGHP presence at conferences is another way to introduce the association to students, especially graduate students who are beginning to focus their careers. Sponsoring a few student registrations in exchange for acknowledgment in conference papers and presentations is an excellent way to engage students and promote the association at the same time.