Hazards from falling chunks of ice (“icefall”) may develop along highway slopes, above mine openings and from building structures or transmission lines. Unlike rockfall, evidence of icefall occurrence is not always apparent given that ice can melt in such a short duration of time. Icefall hazards are not routinely considered by the civil engineering and geologic/natural hazards communities; however, the consequence of direct impact with structures or vehicles can be just as catastrophic as rockfall.

A significant (est. 1,200 to 1,300 kJ) icefall event occurring on 6 April 2012 near Mile Post 113 along the Seward Highway resulted in serious injury to a motorist (Figure 1). Alaska Department of Transportation and Public Facilities and the author developed preliminary research aimed at better understanding icefall hazards, potential failure mechanisms and risk of direct impact along Alaska state highways. The icefall hazard research project was initiated in 2015 and was broken down into two distinct phases – Phase No. 1 Literature Review (completed 28 February 2016) and Phase No. 2 Site-Specific Icefall Hazard Studies (completed February 2018). The Phase No. 2 Report summarizes the results of onsite studies, preliminary icefall hazards technical evaluations, and provides critical icefall predictive indicators with a range of potential mitigation solutions. The report can be found online at http://www.dot.state.ak.us/stwddes/research/assets/pdf/4000-168.pdf .

Alaska is not the only place where icefall hazards may present themselves. Another such icefall event occurred in February of 2011 outside of Terrace, British Columbia (Figure 2), where a tour bus was struck by falling ice resulting in injuries to the driver. Icefall hazards have also been observed outside of Bethel, Maine along U.S. Route 2, where falling chunks of ice periodically entered the roadway in 2010. Internationally, the Norwegian and Austrian Ministries of Transportation also have experience with icefall hazards mitigation, as demonstrated by the use of “icefall slots” using rockfall netting with solid bar anchor “stand-offs” (Figure 3).

Based on the results of the research cited above, large slabs of ice tend to develop on rock slopes when the following criteria are present: (1) steady-state discharge of upslope surface water over the slope crest; (2) average ambient air temperatures at or above freezing, with subsequent refreezing at night. An example of a sizeable cascading ice slab is shown in Figure 4. The release of such chunks may occur (“trigger”) when air temperatures exceed freezing or when high incoming solar radiation warms the dense bedrock substrate, resulting in loss of ice interface adhesion strength through melting. This loss of interface adhesive shear strength is what ultimately results in slab displacement and eventual impact below.

Given that rockfall catchment ditches are not explicitly designed for icefall capture, geohazards engineers, planners, and DOT maintenance managers should consider monitoring and periodic evaluation of areas with known ice development.

Should you have any questions about this article or icefall hazard mitigation measures, contact Dave Scarpato at (603) 361-0397 or Dave@scarptec.com. 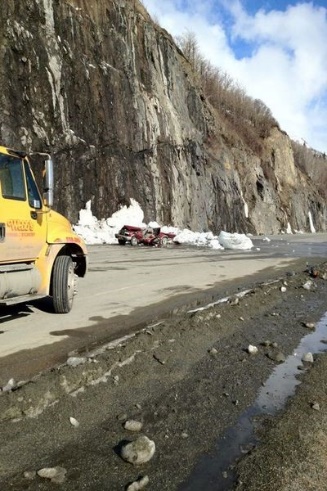 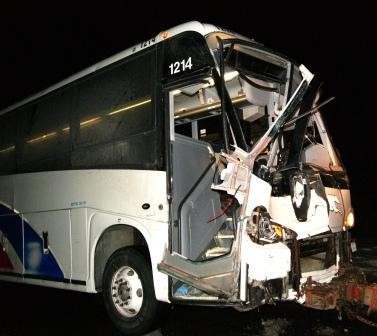 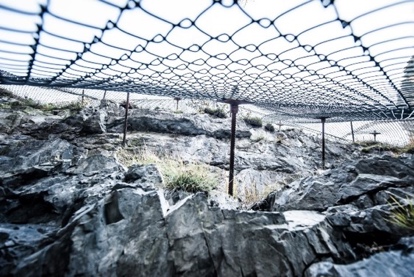 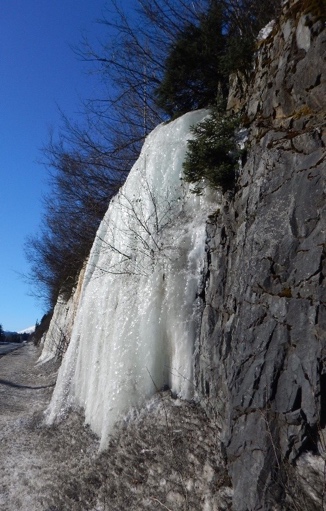